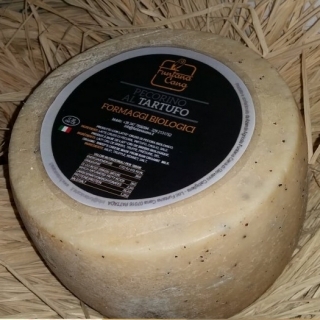 If there’s one thing that can make our mouth-watering pecorino cheese into an exceptional gourmet treat, it’s truffle that has grown naturally in the soil of Sardinia. Truffles are a true gift from the earth, with an unmistakable flavour that simply can’t be surpassed. Truffle harvesting season is a special time in Sardinia; that’s the nature part of our special pecorino cheese. The nurture part comes in the way we care for the flocks of Sardinian sheep that produce the organic milk that goes into our pecorino. We only use unpasteurised milk from sheep that are raised on pastures with the range of grasses and herbs they need for health. The cheese is made in a traditional way, using rennet and salt, and given all the time to mature that it needs. In this way, it develops its own distinctive flavour before we add the truffle, in the form of a paste that passes on its own unique character to the cheese. Nature and nurture working together to create outstanding taste and texture in the form of a delectable veined cheese that is firm yet crumbles readily. That’s unmistakeably our Sardinian pecorino cheese with truffle!

< Back to Sardinian Cheese products
Continue to basket >